WHAT IS PSA TECHNOLOGY.

WHAT IS PSA TECHNOLOGY

Oxygen Concentrators, whose historical development started in the 1950s, continue to be used for personal needs but have undergone a rapid development process in line with the diversified industrial and medical usage areas and increasing needs in a short time.
Oxygen is generally obtained by five different processes: Air separation (ASU), Pressure Swing Adsorption (PSA), vacuum pressure swing adsorption (VPSA), water separation by electrolysis, and membrane technology.
At the point reached today, Pressure Swing Adsorption (PSA) technology, which stands out among different production techniques, is the first choice with software control, low cost, and sustainable efficiency features in industrial and medical usage areas that require high pressure, flow, and purity. Pressure swing adsorption (PSA) is a technique used to separate some gas species from a mixture of gases (typically air) under pressure according to the species' molecular characteristics and affinity for an adsorbent material. It operates at near-ambient temperature and significantly differs from the cryogenic distillation commonly used to separate gases.
Selective adsorbent materials (e.g., zeolites, molecular sieves, activated carbon, etc.) are used as trapping material, preferentially adsorbing the target gas species at high pressure.
The process then swings to low pressure to desorb the adsorbed gas. Pressure swing adsorption process (PSA) is based on the phenomenon that under high pressure, gases tend to be trapped onto solid surfaces, i.e., to be "adsorbed". The higher the pressure, the more gas is adsorbed. When the pressure is dropped, the gas is released or desorbed. PSA can be used to separate gases in a mixture because different gases are adsorbed onto a given solid surface more or less strongly. If a gas mixture such as air is passed under pressure through a vessel containing an adsorbent bed of zeolite that attracts nitrogen more strongly than oxygen, a fraction of nitrogen will stay in the bed, and the gas exiting the vessel will be richer in oxygen than the mixture entering. When the bed reaches the limit of its capacity to adsorb nitrogen, it can be regenerated by decreasing the pressure, thus releasing the adsorbed nitrogen. It is then ready for another cycle of producing oxygen-enriched air.
Using two adsorbent vessels allows near-continuous production of the target gas. It also allows a pressure equalization, where the gas leaving the vessel being depressurized is used to partially pressurize the second vessel.
This results in significant energy savings and is a common industrial practice. Aside from its use to supply medical oxygen, or as a substitute for bulk cryogenic or compressed-cylinder storage, which is the primary oxygen source for any hospital, PSA has numerous other uses. One of the primary applications of PSA is in the removal of carbon dioxide (CO2) as the final step in the large-scale commercial synthesis of hydrogen (H2) for use in oil refineries and in the production of ammonia (NH3). Refineries often use PSA technology in the removal of hydrogen sulfide (H2S) from hydrogen feed and recycle streams of hydrotreating and hydrocracking units. Another application of PSA is the separation of carbon dioxide from biogas to increase the methane (CH4) ratio. Through PSA the biogas can be upgraded to a quality similar to natural gas. This includes a process in landfill gas utilization to upgrade landfill gas to utility-grade high purity methane gas to be sold as natural gas. 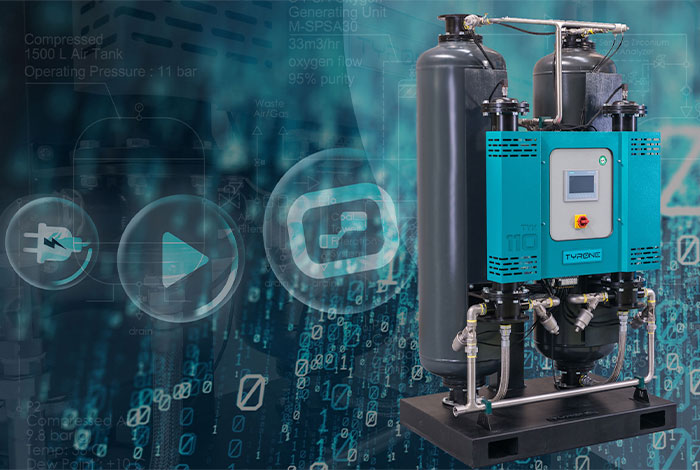